Abominations are the result of alien experiments on abducted humans. They are found only on board Mothership Zeta in the biological research laboratory in 2277.

From what can be confirmed through various alien captive recorded logs, abominations are captured human test subjects whose bodies have been hybridized with alien DNA with the intention of creating biological weapons. The transformation process turns the subjects into feral, menacing creatures - hostile to anything that is not one of them, including their alien creators - and removes all discernible sexual characteristics, leaving them with an androgynous appearance. It is unknown if there are more of them on the ship after finishing the Mothership Zeta add-on.

Their known creation history and asexual appearance seems very similar to super mutants, while their hostility and lack of self-preservation are reminiscent of feral ghouls. Super mutants and feral ghouls both "evolved" from humans, and specimens of both species can be found in the alien cryo labs.

After spotting a target, an abomination will point and wail loudly, and then attack with its long arms (in a manner that is very similar to feral ghouls). Abominations are a fairly standard opponent, and are easily killed with alien weapons. When killed, their bodies often contain various conventional alien items, such as alien power modules or alien epoxy. Sometimes, however, they contain items commonly found on the bodies of feral ghouls, such as packs of cigarettes, pre-War money, harmonicas and other miscellaneous items, which serve to reinforce the abominations' human origin.

In Fallout 3, There were four abominable creatures drawn by Adam Adamowicz that were uploaded with the rest of his work on the Bethesda Blog Flickr account post-mortem. They are entitled Abomin01-04 and were cut from the final version presumably at the conceptual stage. 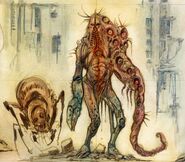 Abomin04
Add a photo to this gallery

Retrieved from "https://non-aliencreatures.fandom.com/wiki/Abomination_(Fallout)?oldid=71686"
Community content is available under CC-BY-SA unless otherwise noted.