Officer Alexander James Murphy A.K.A. RoboCop, is a cyborg built by corrupt conglomerate business Omni Consumer Products (OCP) from a New Detroit police officer who was killed in the line of duty. In terms of organic tissue, the only pieces that remains are mere portions of both his cerebrum and cerebellum as well as his face, which was skinned from his original body and stretched over the cyborg's head to make him appear more human. This process has notably left his head appearing "fat", as it is no longer in its original shape. 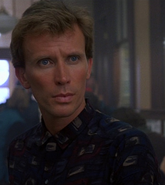 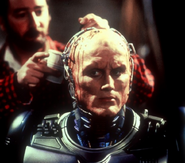 Ready Player One
Add a photo to this gallery

Retrieved from "https://non-aliencreatures.fandom.com/wiki/Alex_Murphy?oldid=74628"
Community content is available under CC-BY-SA unless otherwise noted.