Alpen (singular: Alp) are supernatural creatures from European folklore which attack sleeping victims and are responsible for provoking nightmares and, in some cases, sleep disorders.

Although their name originates from the same etymological roots as Elf, the Alpen more closely resemble a combination of Demon, Vampire and Goblin, and may be summoned by witches to do their bidding. They're sometimes considered the male counterpart to the female Mare.

Alpen are nocturnal creatures and show a preference for targeting women, although they also attack men, children and animals. They typically sit on the chest of sleepers, provoking bad dreams and causing them increasing difficulty to breathe until they wake up desperate for air.

They may also drink blood or milk from the victim. If the victim is a small animal, the Alp's attack may be fatal, crushing the creature to death under the Alp's weight. 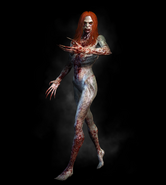 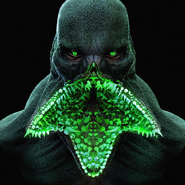 Alpe from Grimm
Add a photo to this gallery

Retrieved from "https://non-aliencreatures.fandom.com/wiki/Alp?oldid=80175"
Community content is available under CC-BY-SA unless otherwise noted.