Ampharos is an electric-type Pokémon species from the Johto region. Its life cycle consists of a juvenile stage called Mareep and an intermediary stage called Flaaffy.

When exposed to the Mega Stone known as Ampharosite, this Pokémon can temporarily Mega Evolve into a form known as Mega Ampharos, which is an electric/dragon-type.

The three life stages of this species are easily distinguishable from each other. The first stage, Mareep, is quadrupedal, whereas Flaaffy and Ampharos are bipedal. Mareep and Flaaffy are stout creatures and are covered in soft fluffy wool which makes them resemble sheep. By contrast, Ampharos is entirely hairless. The skin color differs in the three stages: it is blue in Mareep, pink in Flaaffy, and yellow in Ampharos.

Conversely, all three stages share some similarities as well. The shape of the head remains mostly unchanged, and they all have round black eyes, conical striped horns, and a long striped tail with a luminescent orb at the tip. Being electric-type Pokémon, they naturally employ electrical discharges as their primary means of attack.

As stated above, Mareep is a blue-skinned quadrupedal sheep-like Pokémon with a striped tail and striped horns. Its tail ends in a red-colored orb. Its body is entirely covered in wool, save for its legs, tail, and face. It has two toes on each foot and doesn't appear to have hooves, claws or nails of any sort.

Mareep's fleece stores a lot of static electricity: enough to easily electrocute people who touch them. The more charged it gets, the brighter the tail orb will glow. Additionally, storing air in its fleece allows this Pokémon to stay cool in hot weather and warm in cold weather. The fleece is naturally shed in the summer, but takes only a week to grow back.

The intermediary stage, Flaaffy, looks similar to Mareep at first glance, but shifts to a bipedal rather than quadrupedal posture. Its skin becomes pink and the orb on its tail becomes blue. It loses most of its wool and now has an exposed abdomen, although it still has a lot of wool on its shoulders, chest and head. It has short arms with no digits, resembling flippers; and its feet have a single hoof-like nail, even though this Pokémon is plantigrade.

Flaaffy's skin has been described as rubbery and nonconductive, which helps it resist the high amounts of electricity stored within its wool. As a result, only the hairless parts of its body are safe to touch.

The final stage, Ampharos, has the most distinct appearance, due to the fact that it has lost all of its wool and now has no hair on its body. Its skin is yellow and smooth, with a white abdomen. It also has black stripes on its tail, neck, and horns. The arms remain fingerless, and the feet remain plantigrade, with a single nail. The neck is notably longer than that of the previous stages. A second red orb now adorns its forehead, matching the one on its tail.

Known as the "Light Pokémon", the luminescent orb in Ampharos' tail can become bright enough to be seen from kilometers away and has historically been used as a beacon to guide people and ships. Pokédex entries have stated that this light can be seen from space. 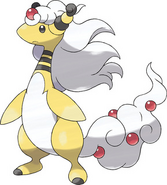 Mega Ampharos
Add a photo to this gallery

Retrieved from "https://non-aliencreatures.fandom.com/wiki/Ampharos?oldid=80820"
Community content is available under CC-BY-SA unless otherwise noted.