Darth Vader is a cybernetically-augmented human Sith Lord and military commander of the mighty Galactic Empire that governs most of his home galaxy. He is second in command in the imperial military hierarchy, taking direct orders from Emperor Palpatine (a.k.a. Darth Sidious), who mentored him in the ways of the Force. His real name was Anakin Skywalker.

Anakin Skywalker was born on the desert world of Tatooine, with his mother being Shmi Skywalker and his father remaining a mystery. He was trained as a Jedi Knight by Master Obi-Wan Kenobi to serve the Galactic Republic, at the request of Kenobi's own Master, Qui-Gon Jinn, who requested that Skywalker become a Jedi apprentice, despite the Jedi Council deterring his request. Skywalker was extremely skilled as a warrior, and had mastery over the Force. However, his power hunger and frustration with the Jedi Order led him to fall to the dark side and become a Sith, being mentored by Senator Palpatine. While fighting his former mentor Kenobi, Vader fell into a pit of lava and what remained of his body was put into a life-support armor, making him a cyborg.

When the Republic was overthrown and Palpatine became Emperor, Vader was made a commander and put in charge of the creation of the Empire's mightiest weapon, the Death Star, capable of destroying an entire planet as means of intimidation. However, technical plans that could reveal the Death Star's weakness were stolen by soldiers of the Rebel Alliance. The Emperor tasked Vader, along with Grand Moff Tarkin, to retrieve the stolen plans. To do so they successfully captured the ship transporting rebel agent Princess Leia Organa and held her prisoner, with Tarkin going as far as to order the destruction of the Princess's home planet, Alderaan. Unknown to them, however, the plans had been hidden in the droid R2-D2, who was sent to the planet Tatooine along with fellow droid C-3PO. There, the robots met the youth Luke Skywalker and an aged Obi-Wan Kenobi, now living in exile as a hermit, and referring to himself as "Ben". The four of them along with two smugglers named Han Solo and Chewbacca managed to infiltrate the Death Star and save the Princess. During the rescue, however, Vader dueled with and ultimately killed Kenobi.

While Luke Skywalker escaped and the plans allowed the Rebels to coordinate an attack to successfully destroy the Death Star, Vader valiantly defended the superweapon. He almost destroyed Luke's X-wing fighter, but a last-minute appearance of Han Solo in the Millineum Falcon caused his TIE fighter to spin off into space. However, Vader restored control and flew away to a safe place.

After training with Master Yoda to become a Jedi, Luke fought Vader on the planet Bespin, where Vader revealed that he was actually Luke's father and asked him to join the dark side like he did, claiming this was Luke's destiny. However, Luke chose to fall down a shaft to his apparent death, at which point Han Solo rescued him after Vader sliced off Luke's right hand.

The third and final confrontation between Luke and Vader happened aboard the second Death Star which was being constructed in orbit of the Forest Moon of Endor. Despite Luke defeating him and the Emperor telling him to kill Vader and join the dark side to replace him, Luke refused and preferred to spare his father's life. The Emperor tortured Luke as a result, but in a final act of redemption, Vader threw his own master down a seemingly bottomless shaft and told Luke to take off his own life support helmet in order to die peacefully.

He was last seen as a ghost in Endor, along with the ghosts of Obi-Wan Kenobi and Master Yoda.

As a leader, Vader is ruthless, ambitious and thoroughly despotic. He has little tolerance for failure and brutally punishes those who disrespect him. To the other empire agents, Vader can sometimes come across as a figure of ridicule because of his faith in an old religion, as he's one of the last Force-users in the galaxy. To his subordinates, he's a fearsome and enigmatic man with strange and unnatural abilities, something of an evil sorcerer.

He is also quite treacherous, at one point proposing to Luke that they could overthrow his own mentor the Emperor and rule the galaxy together as father and son. However, at the end of his life he shows some guilt and remorse.

Vader's control over the Force allows him strong telekinetic abilities, including the ability to choke an enemy to death using only his mind. He also has some precognitive abilities, enhanced senses and reflexes, and is an extremely skilled military strategist, lightsaber duelist and pilot. As a cyborg, he also possesses superhuman strength and endurance. 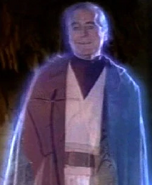 Vader's Force ghost on Endor.
Add a photo to this gallery

The character of Darth Vader was created by George Lucas for his 1977 space opera film Star Wars and became one of the most iconic villains in the history of science fiction. His dark suit, cape and helmet designed by Ralph McQuarrie, the iconic sound of his deep breathing created by sound designer Ben Burtt, and the character's voice provided by actor James Earl Jones all contributed to making him a menacing and powerful figure.

In the original film, there is no indication of Darth Vader being Luke and Leia's father (or of Luke and Leia being siblings in any case). That plot point was introduced in the sequels. In the original script treatment of The Empire Strikes Back, written by Leigh Brackett, Vader and Luke's father were clearly distinct characters, with the former being responsible for the latter's death, as described by Obi-Wan Kenobi in the original film. Unfortunately, Brackett died before being able to adapt the script and Lucas opted to rewrite the character's history, making him Luke's father. The idea that Luke had a sister was present in Brackett's script, but the sister was also a different character and not Princess Leia.

Retrieved from "https://non-aliencreatures.fandom.com/wiki/Anakin_Skywalker?oldid=88293"
Community content is available under CC-BY-SA unless otherwise noted.