Start a Wiki
This article contains text that has been copy-pasted from external sources, which is against the rules of this wiki. The copy-pasted sections of this article will need to be either rewritten or removed, according to our policies. 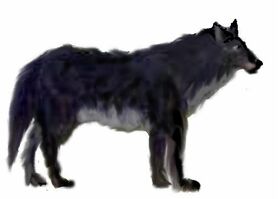 The Andean Wolf was first discovered with only a skin bought by a German animal-dealer, Lorenz Hagenbeck, in Buenos Aires in 1926. Hagenbeck sent the skin to Germany, where it was moved around to several museums, until it reached Munich. In 1940, Dr. Ingo Krumbiegel inspected the skin and claimed that it was a mountain species of the maned wolf. However, he refrained from producing a description of the species until more evidence was found of its existence.

In 1947, Krumbiegel learned from Hagenbeck that when he bought the skin there were three others just like it. Krumbiegel, convinced that this creature was not simply a mongrel, related the skin to an unusual skull he had examined several years previous which had been collected in the Andes. The skull was 30 cm long, while the average of the others in the group was 25 cm. Krumbiegel published a description of the Andean Wolf, and gave it the Latin name Dasycyon hagenbecki.

Retrieved from "https://non-aliencreatures.fandom.com/wiki/Andean_Wolf?oldid=50827"
Community content is available under CC-BY-SA unless otherwise noted.