Anguirus was the second daikaiju to appear in a Toho film, opposing the King of the Monsters himself in Godzilla Raids Again which made him the very first kaiju to appear as an enemy to Godzilla.

Anguirus is a four-legged dinosaur that looks similar to an ankylosaurus. He has several horns at the top of his head and a a single horn above his nose like a rhinoceros. His face is long and drawn out, like a crocodile, and has rows of jagged, serrated teeth. His carapace is studded with long, sharp spikes. Anguirus' tail is longer than his body and makes up most of his body length, and is covered with spikes. His hind limbs are longer than his forelimbs, enabling him to stand up on them to his full height, but he generally walks upon all fours. According to Godzilla Raids Again, he has not one, but five brains, one in his head and one in each of his limbs. This allows him to react very quickly.

Anguirus does not have any "special" abilities in particular, so he uses his teeth, claws, horns, and spiked carapace as his weapons. This has contributed to his appeal among fans of "no-frills" Japanese monsters. He has been known to hurl himself backwards at a foe, ramming them with his spiny carapace (Godzilla vs. Gigan). He is also capable of burrowing substantial distances (Godzilla vs. Mechagodzilla). Recently, the Anguirus that appeared in Godzilla: Final Wars has shown the ability to curl himself into a ball and propel himself at tremendous speed, an ability most likely inspired by the video game Godzilla: Destroy All Monsters Melee. In many video games, Anguirus can fire a sonic roar from his mouth, this ability has never been used in a movie. 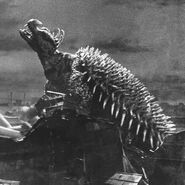 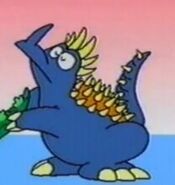 Anguirus' Skeleton in Godzilla: King of the Monsters
Add a photo to this gallery
Retrieved from "https://non-aliencreatures.fandom.com/wiki/Anguirus?oldid=83533"
Community content is available under CC-BY-SA unless otherwise noted.