The Aquatics (Piscanthropus submarinus), or simply Aquas, are an oceanic species descended from human beings. They originated as one of the many genetic offshoots of humanity created by biological engineering circa 300 years in the future, but ended up outliving all the other human descendants on Earth.

The Aquatics are gregarious creatures which live in schools, and care for their young communally. They communicate in a complex language of "wails, clicks and twitterings".

Despite descending from humans, Aquatics no longer breathe air like their ancestors. Instead, they have pectoral gills through which water circulates, much like a fish's. These gills also serve to filter plankton, which is then directed to their digestive system and makes up most of their food source. However, they're also known to feed on fish, which they hunt in groups moving around in coordinated attacks, much like dolphins. Technically, Aquatics are still omnivorous, as they can digest vegetable matter as well. Females also produce milk for the young, which betrays their mammalian ancestry.

Anatomically, their legs have fused together to produce a powerful tail which propels them through the open oceans. Their arms are also flattened and paddle-like, but retain functional hands. Like dolphins, the Aquatics have strongly developed echolocation. Their eyesight seems to be well-developed too, given their large bulging eyes. However, they have no color vision.

Some groups of Aquatics are known to inhabit extreme depths and have a slow, sluggish metabolism which allows them to conserve energy in an environment without much food available. These abyssal groups would later evolve into the second Aquatic species, known as Piscanthropus profundus.

Created at some point in the late 23rd century - as an improvement over the earlier Aquamorphs -, the Aquatics later survived the great extinction caused by a sudden reversal of the Earth's magnetic poles which wiped out all intelligent life on land. While the terrestrial environments where inherited by non-sapient descendants of genetically modified humans, which radiated and gave rise to numerous different species, the Aquatics remained mostly unchanged, and kept on living simple lives in the oceans, unconcerned with the events of the world outside their immediate realm. They did, however, by the time of the 30th century, start to develop increasingly complex communities.

About 50,000 years in the future, the Aquatics continued to evolve, becoming even more streamlined in shape. By that point, their population had increased and their knowledge of the world - including their medical science - advanced. However, as their population grew they eventually started to run short on food sources and felt the need to explore other environments. Just as the ancestral humans explored the seas, the Aquatics started to turn their eyes to the dry land.

About half a million years in the future, the Aquatics devised an efficient way to properly explore the land surface by enclosing themselves within water-filled transparent envelopes made from gelatinous algal filaments. This allowed then to move onto earth in order to harvest food, both animal and vegetable. However, they often got into conflicts with the primitive ape-like descendants of terrestrial humans, which had re-evolved sapience to some extent, but not civilization.

Eventually, the same algae that the Aquatics had bred to create the envelopes ended up spreading wildly over the world's coasts and, somewhat ironically, became a valuable food source that could be cultivated with relative ease. Later yet, concentrated algal crops on the open seas ended up becoming the primary food source for the species.

The next great extinction would happen about 5 million years in the future, when the Earth was invaded by a species of highly modified descendants of those human beings who had left Earth to colonize other planets, long before the first magnetic reversal took place. These creatures, so radically different from their ancestors that they could only survive on the Earth's atmosphere enclosed in robotic suits, nevertheless colonized the planet (which they failed to recognize as their ancestors' home world), and xenoformed it. In this process they radically altered landscape and atmospheric composition, and stripped the world of all its natural resources, leaving nothing but a devastated planet behind as they moved on to their next unfortunate destination.

As a result of this, all the human descendants were wiped out, except for the abyssal species of Aquatics, Piscanthropus profundus, which descended from those which had adapted themselves to inhabit the great oceanic depths, completely devoid of light. These creatures of the deep live around thermal vents and feed on worms, crabs and similar creatures. Unlike the now-extinct surface-dwelling Aquatics, they are completely blind to normal light and see their world in infrared "heat vision" instead. But they're still sapient, and aware that some change has taken place high above. The book ends with the narrator pondering whether someday they will be able to survive in the world above, to colonize the now-empty environment which is so alien to them, and perhaps repopulate the surface. 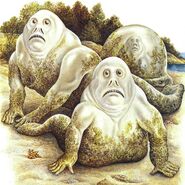 With their gelatinous algal envelopes, the Aquatics are able to explore land 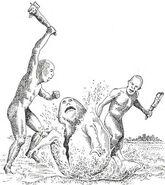 Two Boat Builders attack an Aquatic, bursting its protective suit
Add a photo to this gallery

Retrieved from "https://non-aliencreatures.fandom.com/wiki/Aquatic?oldid=69577"
Community content is available under CC-BY-SA unless otherwise noted.