A hive-based species of giant blind spiders which inhabit a gas-filled subterranean complex of caverns near New Orleans. Once released by an earthquake, the hostile creatures readily attack the city. Curiously, they not only operate in an eusocial hive system under the reign of the humongous queen; but also seem to possess a telepathic hive mind, to such an extent that once the queen is killed, every drone in the hive will immediately perish as well.

They also have the ability to breathe fire (thanks to internal vesicles filled with inflammable gas) and to skate over the water surface, which is extraordinary, considering their size. Even the queen, which is the size of a small house, is able to cling vertically and even upside down from buildings and from the web it spins. What is their natural source of food in the underground environment has never been properly explained, but it is clear that they are carnivorous and have a venomous bite. Although blind, they are able to use echolocation to easily find their prey, and are extremely aggressive. They have been observed removing the eyes of their dead victims, presumably for consumption.

They are very similar to Lavalantulas 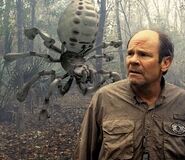 Add a photo to this gallery
Retrieved from "https://non-aliencreatures.fandom.com/wiki/Arachnoquake_Spider?oldid=75885"
Community content is available under CC-BY-SA unless otherwise noted.