The Bandersnatch is a huge ferocious beast that is mentioned in Lewis Carroll's novel, Through the Looking-Glass, and What Alice Found There, and appears in his poem The Hunting of the Snark, and some adaptations.

They're believed to inhabit the magical realm that exists beyond the looking glass, and may also be found on the same island inhabited by the Snark. Virtually nothing is known about the Bandersnatch, except that it has a long neck and snapping jaws.

In A New Alice in the Old Wonderland, by Anna Matlack Richards, the Bandersnatch is described as possessing extremely long legs and tail, and is also capable of flight.

In the 1987 animated film Alice Through the Looking Glass, the Bandersnatch appears alongside the Jabberwock and the Snark. It is portrayed as a fire-breathing alligator-like creature with two legs and six arms.

In Tim Burton's Alice in Wonderland film, the Bandersnatch appears as a dog-like creature under control of the Red Queen. It is large, with a barrel chest and fore-paws that are quite dexterous. It's covered in pale, shaggy fur with dark grey spots and has a somewhat flat (but not pug) face, with a wide mouth that has multiple rows of teeth and a long tongue. It also has a long tail. It doesn't speak, but seems at least somewhat intelligent. Evidently, it has venomous (or otherwise poisonous) claws, wounds from which will 'putrefy' unless treating by someone with evaporating skills - barring that, they may also be treated with the saliva of the Bandersnatch itself. 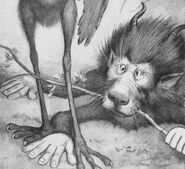 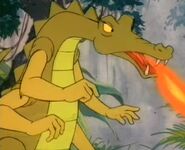 Retrieved from "https://non-aliencreatures.fandom.com/wiki/Bandersnatch?oldid=84753"
Community content is available under CC-BY-SA unless otherwise noted.