Nothing is known more about her other than she is the mother of the Sharpe children. Her personality can be cruel and abusive according to her daughter. While the siblings were only young, Beatrice met her end by getting slain in the head while in the bathtub after she learns that her children are having an incestous relationship. She appears in the film, where she warns Edith Cushing about her future which soon became true. 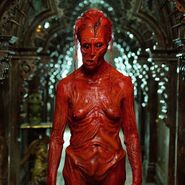 Add a photo to this gallery

Retrieved from "https://non-aliencreatures.fandom.com/wiki/Beatrice_Sharpe?oldid=79837"
Community content is available under CC-BY-SA unless otherwise noted.