The bunyip or kianpraty is a large mythical creature from Aboriginal mythology, said to lurk in swamps, billabongs, creeks, riverbeds, and waterholes.

The origin of the word bunyip has been traced to the Wemba-Wemba or Wergaia language of Aboriginal people of South-Eastern Australia. However, the bunyip appears to have formed part of traditional Aboriginal beliefs and stories throughout Australia, although its name varied according to tribal nomenclature. In his 2001 book, writer Robert Holden identified at least nine regional variations for the creature known as the bunyip, across Aboriginal Australia. Various written accounts of bunyips were made by Europeans in the early and mid-19th century, as settlement spread across Australia.

The word bunyip is usually translated by Aboriginal Australians today as "devil" or "evil spirit". However, this translation may not accurately represent the role of the bunyip in Aboriginal mythology or its possible origins before written accounts were made. Some modern sources allude to a linguistic connection between the bunyip and Bunjil, "a mythic 'Great Man' who made the mountains and rivers and man and all the animals." The word bunyip may not have appeared in print in English until the mid 1840s.

Descriptions of bunyips vary widely. George French Angus may have collected a description of a bunyip in his account of a "water spirit" from the Moorundi people of the Murray River before 1847, stating it is "much dreaded by them… It inhabits the Murray; but…they have some difficulty describing it. Its most usual form…is said to be that of an enormous starfish" Robert Brough Smyth’s Aborigines of Victoria of 1878 devoted ten pages to the bunyip, but concluded "in truth little is known among the blacks respecting its form, covering or habits; they appear to have been in such dread of it as to have been unable to take note of its characteristics." However, common features in many 19th century newspaper accounts include a dog-like face, dark fur, a horse-like tail, flippers, and walrus-like tusks or horns or a duck-like bill.

The "Challicum bunyip", an outline image of a bunyip carved by Aborigines into the bank of Fiery Creek, near Ararat, Victoria, was first recorded by The Australasian newspaper in 1851. According to the report, the bunyip had been speared after killing an Aboriginal man. Antiquarian Reynell Johns claimed that until the mid-1850s, Aboriginal people made a "habit of visiting the place annually and retracing the outlines of the figure [of the bunyip] which is about 11 paces long and 4 paces in extreme breadth."

Non-Aboriginal Australians have made various attempts to understand and explain the origins of the bunyip as a physical entity over the past 150 years.

Writing in 1933, Charles Fenner suggested it was likely the "actual origin of the bunyip myth lies in the fact that from time to time seals have made their way up the …Murray and Darling (Rivers)." He provided examples of seals found as far inland as Overland Corner, Loxton and Conargo and reminded readers "the smooth fur, prominent 'apricot' eyes and the bellowing cry are characteristic of the seal."

Another suggestion is that the bunyip may be a cultural memory of extinct Australian marsupials such as the Diprotodon or Palorchestes. This connection was first formally made by Dr. George Bennett of Australian Museum in 1871, but in the early 1990s palaeontologist Pat Vickers-Rich and geologist Neil Archbold also cautiously suggested that Aboriginal legends "perhaps had stemmed from an acquaintance with prehistoric bones or even living prehistoric animals themselves… When confronted with the remains of some of the now extinct Australian marsupials, Aborigines would often identify them as the bunyip."

Another connection to the bunyip is the shy Australasian Bittern (Botaurus poiciloptilus). During the breeding season the male call of this marsh dwelling bird is a "low pitched boom," hence it is occasionally called the "bunyip bird."

During the early settlement of Australia by Europeans the notion that the bunyip was an actual unknown animal that awaited discovery became common. Early European settlers, unfamiliar with the sights and sounds of the island continent's peculiar fauna, regarded the bunyip as one more strange Australian animal and sometimes attributed unfamiliar animal calls or cries to it. It has also been suggested that 19th century bunyip-lore was reinforced by imported European memories, such as that of the Irish Púca.

A large number of bunyip sightings occurred between 1840s and 1850s, particularly in the southeastern colonies of Victoria, New South Wales and South Australia, as European settlers extended their reach. The following is not an exhaustive list of accounts:

One of the earliest accounts relating to a large unknown freshwater animal was in 1818 when Hamilton Hume and James Meehan found some large bones at Lake Bathurst in New South Wales. They did not call the animal a bunyip, but described the remains indicating the creature as very much like a hippopotamus or manatee. The Philosophical Society of Australasia later offered to reimburse Hume for any costs incurred in recovering a specimen of the unknown animal, but for various reasons Hume did not return to the lake.

More significant was the discovery of fossilized bones of "some quadruped much larger than the ox or buffalo" in the Wellington Caves in mid 1830 by bushman George Rankin and later, Thomas Mitchell. Sydney's Reverend John Dunmore Lang announced the find as "convincing proof of the deluge." However, it was British anatomist Sir Richard Owen who identified the fossils as the gigantic marsupials Nototherium and Diprotodon. At the same time, some settlers observed "all natives throughout these... districts have a tradition (of) a very large animal having at one time existed in the large creeks and rivers and by many it is said that such animals now exist."

First written use of the word bunyip in 1845

Fossils found near Geelong were revealed by The Geelong Advertiser in July 1845, under the headline Wonderful Discovery of a new Animal. It continued "On the bone being shown to an intelligent black (sic), he at once recognised it as belonging to the bunyip, which he declared he had seen. On being requested to make a drawing of it, he did so without hesitation." The account noted a story of an Aboriginal woman being killed by a bunyip, and the "most direct evidence of all," which was that of a man named Mumbowran, "who showed several deep wounds on his breast made by the claws of the animal." The account provided this description of the creature “The Bunyip, then, is represented as uniting the characteristics of a bird and of an alligator. It has a head resembling an emu, with a long bill, at the extremity of which is a transverse projection on each side, with serrated edges like the bone of the stingray. Its body and legs partake of the nature of the alligator. The hind legs are remarkably thick and strong, and the fore legs are much longer, but still of great strength. The extremities are furnished with long claws, but the blacks say its usual method of killing its prey is by hugging it to death. When in the water it swims like a frog, and when on shore it walks on its hind legs with its head erect, in which position it measures twelve or thirteen feet in height.”—Peter Ravenscroft, Shortly after this account appeared, it was repeated in other Australian newspapers. However it appears to be the first use of the word bunyip in a written publication.

The Australian Museum's bunyip of 1847

[1][2]The so-called Bunyip skullIn January 1846, a peculiar skull was taken from the banks of Murrumbidgee River near Balranald, New South Wales. Initial reports suggested that it was the skull of something unknown to science. The squatter who found it remarked "all the natives to whom it was shown called [it ] a bunyip" By July 1847 several experts had identified the skull as the deformed foetal skull of a foal or calf. At the same time however, the so-called bunyip skull was put on display in the Australian Museum (Sydney) for two days. Visitors flocked to see it and The Sydney Morning Herald said that it prompted many people to speak out about their 'bunyip sightings.'

Another early written account is attributed to escaped convict William Buckley in his 1852 biography of 30 years living with the Wathaurong people. His 1852 account records "in... Lake Moodewarri [now Lake Modewarre] as well as in most of the others inland...is a...very extraordinary amphibious animal, which the natives call Bunyip." Buckley's account suggests he saw such a creature on several occasions. He adds "I could never see any part, except the back, which appeared to be covered with feathers of a dusky grey colour. It seemed to be about the size of a full grown calf... I could never learn from any of the natives that they had seen either the head or tail." Buckley also claimed the creature was common in the Barwon River and cites an example he heard of an Aboriginal woman being killed by one. He emphasized the Bunyip was believed to have supernatural powers.

As stated in the overview, the creature's appearance varies wildly in different depictions, but the few common traits are the fur, and carnivorous diet.

In one legend, it is said to lay eggs among those of platypuses, possibly implying it to be a monotreme of sorts. 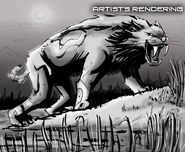 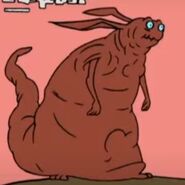 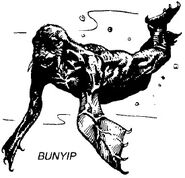 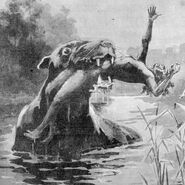 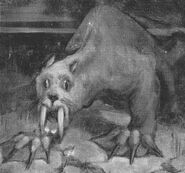 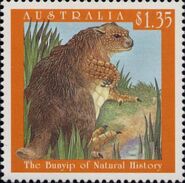 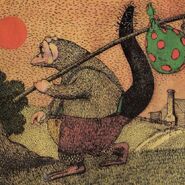 The Bunyip of Berkeley's Creek

Dot and the Smugglers 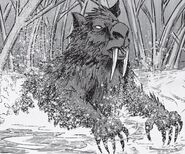