Non-alien Creatures Wiki
Register
Don't have an account?
Sign In
Advertisement
in: Creatures, Fictional Creatures, The Cave Universe,
and 20 more

Cave Monsters are humans that have been mutated by the cave parasite. Known to locals since the Middle Ages, they have been historically considered demons, and valiant knights would often venture into the caves in an attempt to slay them.

Native to a vast cave system amidst the Carpathian Mountains in Romania, the Cave Monsters originate from humans that were infected by a parasitic organism; once it enters its host’s bloodstream, it reproduces and injects a virus that stimulates radical anatomical changes, progressively making it develop monstrous, semi-evolutionary adaptations to the surrounding subterranean environment, and thus benefiting both the host and the parasite; proving that the latter should in fact be considered more of a symbiote. The first symptoms of infection are increased aggressiveness and increassed sensitivity to sound.

The fully-mutated Cave Monsters are large, thin creatures, with rough hairless skin and completely devoid of pigments. The mutation privileged the arms, which became large membranous bat-like wings, whereas the legs were reduced to simple supporting appendages, with the bulk of the movement performed by the arms themselves — which became hypertrophied.

They have large talons to eviscerate prey and they also have a skull whose shape is designed to gather a maximum of sounds. The head also includes a specific organ to generate the sounds that allow for echolocation. The parietal and frontal bones of the skull developed a hollow space; while still maintaining their function of protecting the brain, they also act as a resonance box enabling the propagation of the acoustic impulses emitted by the sonar organ. Each individual creature also has a different cowl design, ranging from a smooth, hollow dome to a crest with three horns.

The monsters display other peculiar features: they have both external and internal jaws, which are able to move independently from each other. In addition, the external jaws’ teeth are limitedly articulated, and can flare in and out in order to achieve a better grip on a prey. The mouth is also equipped with vestigial molars. Sensory whisks sprout from the monsters’ back, aiding them in identifying their location. They also have vestigial eyes, covered by a semi-transparent layer of skin membrane.

The Creatures appear to have a “taunting” behaviour and attitude, as well as a considerable level of intelligence and tactical knowledge. The parasite is present throughout their muscular tissues, being visible as hyphae-like structures.

They can fly, swim, and are smart enough to lay traps and steal vital supplies from potential victims. They can also brachiate with great agility through the stalactites that hang from the caves' ceilings, and pursue prey relentlessly. They are sensitive to bright light and can be disoriented and repelled by focused sonic waves.

It is unclear how much of their original minds they have left, or if they can even recognise humans as being of the same species anymore. While they occasionally seem to attack humans with the specific intention of transmitting the parasite, other times they simply kill victims, presumably to feed upon them. They've been observed to impale still-living victims to stalactites, possibly to preserve them for later consumption. In the absence of humans, their natural prey seems to consist of large, hairless cave rodents.

When Kathryn Jennings was infected by the parasite, she seemed to be conscious of it before the actual transformation took place, and when she left the cave she planned to spread the infection to others, allowing the creatures to "invade" the surface world in this fashion. This suggests that the parasite does in fact assume control of the host's mind, at least to a significant degree. 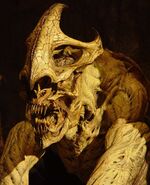