Centaurs (or, more correctly referred to as Hippocentaurs) are a race of beings originating from Greek mythology, where they were usually noted as a brutal, warlike tribe. Like many other beings from ancient legend, they appear like a combination of different creatures. Specifically: they have the head, arms and torso of a human being attached to an equine body, complete with four legs and a tail. The females are described as being quite beautiful. Their fur may be of numerous different colors.

A notable member of this species was the wise sage known as Chiron, whose scholarly interests thoroughly set him apart from the more savage majority.

Centaurs are one of the most popular creatures to appear in fantasy-themed media, behind elves and dwarves, and more recently also behind orcs and goblins. The name has also been used more than once in more science fiction-driven content, although usually in a more vague form. Many creatures inspired by the Centaurs have been created in numerous universes as well, based on the idea of a humanoid upper torso and a mount animal for the lower half. These are often dubbed "centaurs" as well by fans of such media, although this is technically incorrect. 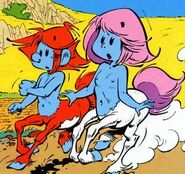 Dawn Summers as a Centauride.

Centauride from The Faery Convention

Young Centaurs and Atlanteans from Asterix and Obelix All at Sea. 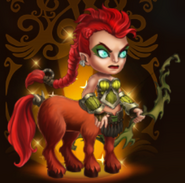 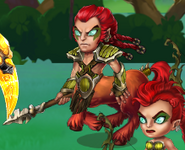 Centaur Warrior in Hero Wars
Add a photo to this gallery

Retrieved from "https://non-aliencreatures.fandom.com/wiki/Centaur?oldid=83707"
Community content is available under CC-BY-SA unless otherwise noted.