Curupira is a mythical creature of Brazilian folklore who has bright red/orange hair, backward feet and serves as a protector of forests and animals.

The Curupira (misspelled as "Curupuri") is mentioned in Sir Arthur Conan Doyle's science fiction novel The Lost World as the reason why the natives avoid the regions surrounding the Maple White Land plateau. Although it isn't explained, it is possible that what they called Curupira was actually one of the Ape-Men who inhabit the mysterious plateau.

The Curupira is mentioned and acknowledged as a type of forest Wesen in the Grimm episode "Tree People". 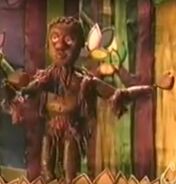 Beastmaster
Add a photo to this gallery
Retrieved from "https://non-aliencreatures.fandom.com/wiki/Curupira?oldid=83047"
Community content is available under CC-BY-SA unless otherwise noted.