Dren was created by scientists Clive Nicol and Elsa Kast in their laboratory. Her genetics comprise of spliced animal and human DNA. Her human DNA is later revealed to come from Elsa's genetic code. She was created using a donated egg and previous chimera DNA from the creatures 'Fred and Ginger'.

Dren grows at a very rapid rate, as she developed to full maturity in a matter of weeks. She is an agile creature, sporting a tail with a regenerating stinger and two hind-legs, as well as four digits on each hand, finally revealing a pair of wings and a barbed hood on the back of her neck, but otherwise appearing human. She is intelligent in nature, as she picks up on several words and spells them out, shows the ability to draw, and shows a keen likeness to dance.

Her final stage of growth involves her changing from female to male. At the film's climax, he is shown being capable of speech, as he says "inside you" to Elsa before being decapitated by Clive.

After his death, it is revealed that Elsa is pregnant with Dren's offspring. 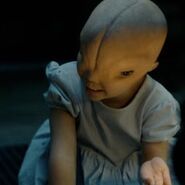 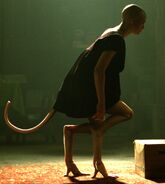 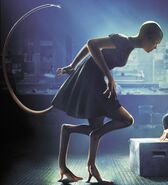 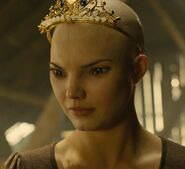 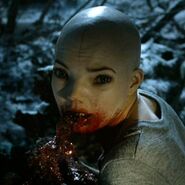 Add a photo to this gallery
Retrieved from "https://non-aliencreatures.fandom.com/wiki/Dren?oldid=87412"
Community content is available under CC-BY-SA unless otherwise noted.