Enola Sciotti is the third wife of Sir Thomas Sharpe.

A woman from Milan, Italy, She was the first woman that Thomas ever felt a sexual attraction to. It was her personality and shared interests more than her looks that first beguiled him. He had made a promise to his sister that he would never give himself to another. Thomas was too scared and too conditioned to obey Lucille to ever go against her outright. Instead he would try and go around her without her knowledge. As his feelings for Enola grew stronger he began to pretend to put the poison mixture in her tea in hopes that he could minimize the effects and delay her passing. Enola’s death came a few weeks after the death of his infant. Thomas was not in the house when she met her end. 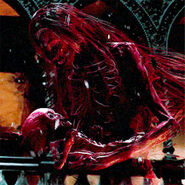 Enola and her child as ghosts
Add a photo to this gallery
Retrieved from "https://non-aliencreatures.fandom.com/wiki/Enola_Sciotti?oldid=79836"
Community content is available under CC-BY-SA unless otherwise noted.