Fairies are a race of magical humanoids from European myth and legends. Although they were originally wingless (mostly); since the 19th century they have been usually depicted as delicate winged humanoids, most commonly female.

They may be portrayed as anything from tiny insect-sized to human-sized beings, and are typically seen as benevolent nature creatures, rarely showing up in urban settings. Less commonly, they may be portrayed closer to their medieval stories, where they tended to be far less friendly and more menacing.

Historically, the word has been used along with variants such as Fay, Fae and Faerie - as well as the term "Fair Folk" - to refer to magical inhabitants of the woods. In earlier folklore, they could be anything from insect-sized to human-sized - or change their size magically - but almost never had wings.

Their origins can be traced down to several sources from across Europe; and might be associated with the Irish Aos Sí, the Persian Peris, the Germanic Elves and even the Greek Nymphs, especially the Wood Nymphs, or Dryads. They have also, although less commonly, been associated with elementals, especially air spirits such as the Sylphs. Some traditions held them as fallen Angels or as an intermediate race between Humans and Angels. Others viewed them as the spirits of the dead, and yet others as an independent species on their own - the latter being the most popular nowadays.

Traditionally, the Fair Folk were often depicted as masters of illusion and as far less benevolent than modern Fairies. Stories about changelings, i.e. human children who have been kidnapped by them and replaced with Fairy doppelgangers, were all too common. There are also stories suggesting that in the land of the Fair Folk, time behaves differently, with characters who spend time there returning to find that several decades and even centuries have passed in the human world. Cold iron is said to confer efficient protection against these creatures.

In Ireland, the Fair Folk were referred to as the Aos Sí or the Sídhe - the latter term being originally used to designate the hills believed to have been inhabited by them. Similarly, there was a time the word Faerie was used to designate both the creatures themselves and the land they inhabited.

However, the Aos Sí designation includes such distinct creatures as Banshees, Dullahans and Leprechauns, among many others. Curiously, the word Banshee actually derives from the Celtic "Bean Sí" and simply means "woman of the Sídhe", therefore being technically usable for designating any female member of the race. It's interesting to note that the Aos Sí themselves derive from earlier stories about the Tuatha Dé Danann, which were regarded as deities by the Irish people before the advent of Christianity.

Additionally, Scottish tradition makes a clear distinction between "seelie" and "unseelie" Fairies; the former being mischievous but generally harmless beings while the latter were far more malevolent.

Legend has it that King Arthur's body was taken by the Fairies upon his death and brought to Avalon, where he resides upon a fairy hill, waiting to be revived when England needs him again.

The image nowadays most commonly associated with Fairies was already popular in England in the 19th century - that being of a small delicate humanoid, typically female, with wings resembling those of a butterfly or wasp. These Fairies are spiritual or elemental beings associated with nature - especially trees or flowers - and are most usually benevolent. They're also commonly depicted as glowing or sparkling, and are sometimes said to become visible only to children and/or to those who believe in them. This image of Fairies has been extremely prevalent in popular culture ever since; from J. M. Barrie's Peter and Wendy to The Legend of Zelda series of games.

In modern culture, terms such as Sprite and Pixie can generally be used as synonym for Fairy, and they may be further associated with Elves, Gnomes or Goblins, all of which may in some cases serve as a sort of "male equivalent" to the predominantly female Fairies. Conversely, in the "Disney Fairies" franchise, males of the species are referred to as Sparrowmen.

The Tooth Fairy is a modern figure, but has established a presence in several countries, in which parents tell children that when they lose a baby tooth, they should put it under their pillow at night and will be visited by the Tooth Fairy, who takes the tooth away and replaces it with a gift - generally a coin.

As is the case with many legendary creatures, the real existence of Fairies has been a subject of debate. There have been numerous cases of witnesses claiming to have observed them and produced genuine photographic evidence. Perhaps the most famous such case is that of the Cottingley Fairies, which have been photographed by two young girls named Elsie Wright and Frances Griffith in 1917.

Four of the photographs feature one or more Fairies in them, while one features instead a winged male figure, identified as a Gnome. The five photographs have become quite famous and caught the attention of Sir Arthur Conan Doyle, who not only defended their veracity but wrote a book called The Coming of the Fairies dedicated to the subject.

According to paranormal enthusiast E. L. Gardner, who studied the Cottingley pictures; the Fairies are supernatural beings which possess a symbiotic relationship with flowers. Similar to how butterflies visit flowers to pollinate them, the Fairies visit flowers to provide a link between the energy of the sun and the material plant, which allows it to grow. Therefore, the plants' lives depend upon the Fairies.

A Fairy Investigation Society was funded in Britain in 1927 and remained active for a few decades, but had completely disassembled by the 1990s.

While Fairies have long been present in literature, the concept of "fairy tales" is only tangentially related to them. In fact, the majority of stories considered fairy tales do not feature Fairies at all. And those that do feature them - such as Perrault's "Sleeping Beauty" and Andersen's "Thumbelina" - usually relegate them to secondary roles. In the second edition of their fairy tales collection, the Brothers Grimm actually removed all references to Fairies because they didn't consider them part of Germany's cultural heritage.

The twelve volumes of Andrew Lang's Fairy Books are collections of fairy tales and were first published in the late 19th and early 20th century. Each book title contains a different color, e.g. The Blue Fairy Book, The Red Fairy Book and so on.

In the Flower Fairies series of illustrations by Cicely Mary Barker - collected in eight books published between 1923 and 1985 - each Fairy is associated with a specific type of flower.

Fairies have been featured in numerous stage plays as well; from Shakespeare's A Midsummer Night's Dream to Gilbert and Sullivan's Iolanthe. In stage, they're usually represented as human-sized for obvious reasons, although Tinker Bell from J. M. Barrie's Peter and Wendy is a notable exception, as she was represented on stage not by an actress, but by a darting spot of light created with the help of a mirror, and her "voice" was provided by a collar of small bells.

Perhaps one of the most notable poems about Fairies is Edmund Spenser's The Faerie Queene, about a Fairy queen named Gloriana. The concept of the Fairy land being ruled by one or more monarchs is present in numerous tales, including the aforementioned A Midsummer Night's Dream and Iolanthe as well as the children stories set in the Land of Oz by L. Frank Baum.

Nowadays, Fairies are more often associated with tales for children, and tend to be significantly less present in adult fantasy works. When they are present, their depiction is usually closer to the mysterious Fair Folk of earlier legends. Naturally, some stories have tried different approaches at depicting them. In the Harry Potter universe, Fairies are a minor species and aren't even regarded as sapient. Isaac Asimov's "Kid Stuff" presents them in a more science-oriented context while simultaneously discussing the theme of fantasy creatures being no longer popular with children at the time the story was written. The Faery Convention by Brett Davis makes a clear distinction between the wingless Faeries and the winged Pixies, and generally brings them closer to (although still different from) their folkloric roots.

One of the Flower Fairies by Cicely Mary Barker. 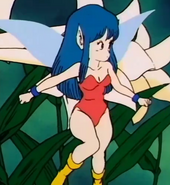 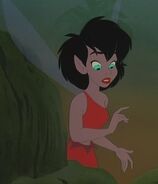 Crysta, a Fairy from FernGully. 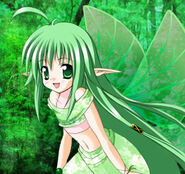 Lilli, a Fairy from RosenkreuzStilette.

Fairy Princess Willow from Scooby-Doo! and the Goblin King. 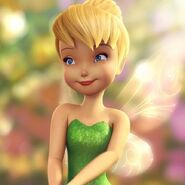 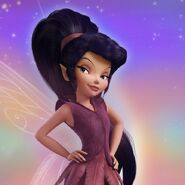 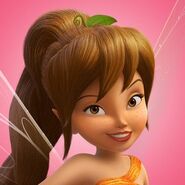 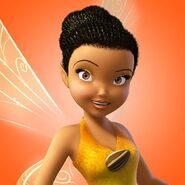 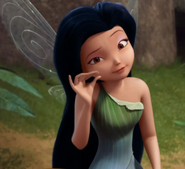 Fairies from the Smurfs

Kenja No Deshi Wo Nanoru Kenja