Godzilla or Gojira is an enormous dinosaur (origins may vary) mutated by radiation. He is often referred to as "the King of the Monsters", and is a pop-culture icon to this day.

The original Godzilla was a prehistoric monster 50 meters tall and weighing 20,000 metric tons, which terrorized the ships of Japan. It was disturbed by an American Hydrogen bomb testing in the Pacific Ocean. After attacking Tokyo, destroying much of the city and killing tens of thousands, Godzilla was defeated when the scientist Dr. Daisuke Serizawa committed suicide out of shame and guilt after activating an experimental weapon, the Oxygen Destroyer, which completely dissolved Godzilla. It was stated at the end of the film that it was doubtful that there was only one creature, alluding not only to the many incarnations of Godzilla that would later appear but also to all the other kaiju monsters that would be featured in future movies. So far there have been 36 films, most featuring an altered incarnation of Godzilla fighting other kaiju.

Godzilla's appearance may have changed over the years, but many of his characteristics have remained constant. His roar has remained the same, only changing in pitch. Godzilla's approximate appearance, regardless of the design of the suit utilized for the creature, remains the same general shape, which is instantly recognizable: a giant, mutant dinosaur with rough, bumpy charcoal-gray scales, a long powerful tail, and jagged, bone-colored dorsal fins. Godzilla's iconic character design is a blended chimera inspired by various dinosaurs, gleaned from children's dinosaur books and illustrations from an issue of Life magazine: Godzilla has the head and lower body of a Tyrannosaurus, a triple row of dorsal plates reminiscent of a Stegosaurus, the neck and forearms of Iguanodon, a tail and skin texture of a crocodile, although in his first appearance, his skin was based on the victims of the bombings of Hiroshima and Nagasaki. Godzilla's dorsal plates have themselves altered in size and appearance over the years.

In Shin Godzilla, his appearances appeared to be different than other versions, having evolved throughout the movie from a frilled shark /eel like creature to his famous appearance, then to a reddish color while also standing upright, almost looking like his final form. And finally his final form which is the most well known but with different traits, including a lower jaw in his fourth form is similar to that of a snake, and on top of being able to open wide, is also able to split open when using his atomic breath.

Godzilla's signature weapon is his distinctive atomic breath. His dorsal spines glow ominously, and then he lets loose with a concentrated blast of radiation from his mouth. This power is commonly mistaken for breathing fire. Godzilla has been shown apparently being able to adjust the intensity of his ray, varying from a blast of superheated vapor, to a beam with explosive and concussive properties. In most of the films, his breath is neon-blue, although in some films it is reddish-orange and greyyish-white.

In addition to his deadly atomic breath, Godzilla can also emit atomic energy in all directions from every inch of his body in a short-range pulse called the nuclear pulse. Godzilla used this ability to kill Orga. Godzilla has also displayed an uncanny ability to resist injury. Not even the pressure and cold of deep sea trenches can kill him. Godzilla displays an immunity to conventional weaponry, and he is even shown to be resistant to technology from the future. He has demonstrated the ability to survive complete submersion in magma for an extended period of time. He has even survived being at ground zero during asteroid impacts and being buried under tons of ice for years at a time, seemingly cut off from any oxygen source. His hide has been breached only occasionally, usually only by other kaiju. In the MonsterVerse, Godzilla can create tsunamis simply by exiting the water.

This is all possible due to an extremely advanced and highly efficient regenerative ability. Godzilla's regenerative abilities may have something to do with his radioactive properties. Regenerator G1 is the name given to a substance in his cells that is responsible for his swift healing. Even neural tissue can be rebuilt by Godzilla's unique biology. This is remarkable since neural tissue does not heal in naturally occurring organisms.

In Shin Godzilla, he has powers no incarnation has ever had, he can fire back beams from gaps in between his dorsal plates and can fire a beam from his tail in case to prevent bombs hitting

In Godzilla vs Gigan he and Anguirus can speak human words. 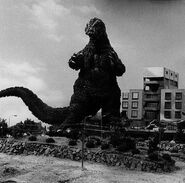 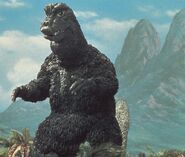 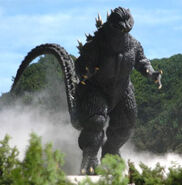 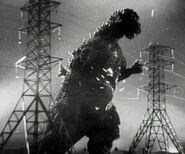 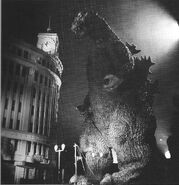 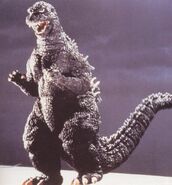 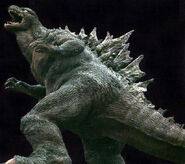 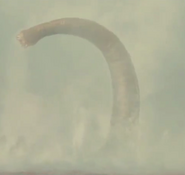 Greg Broadmore's concept art of Godzilla during the production of the 2014 reboot.

The design of Godzilla by Mark McCreery during the production of the cancelled 1994 American film.

The sculpture of Godzilla by Stan Winston Studios. 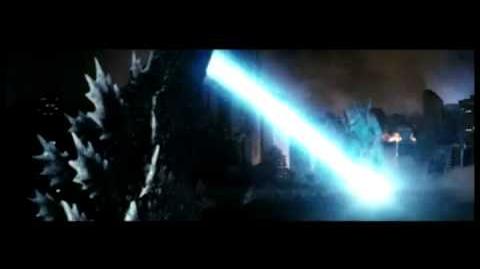 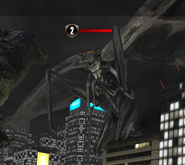 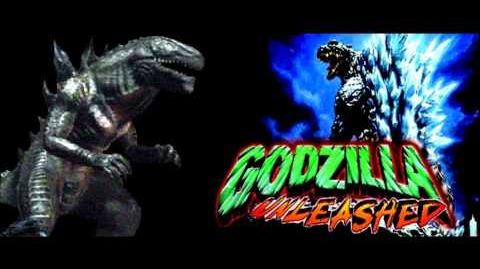