The Mongolian death worm (Mongolian: olgoi-khorkhoi, "large intestine worm") is a creature purported to exist in the Gobi Desert. It is generally considered a cryptozoological creature (cryptid): one whose sightings and reports are disputed or unconfirmed.

It is described as a bright red worm with a wide body that is 2 to 5 feet (0.6 to 1.5 m) long. The worm is the subject of a number of extraordinary claims by Mongolian locals - such as the ability of the worm to spew forth sulfuric acid that, on contact, will turn anything it touches yellow and corroded (and which would kill a human), as well as its purported ability to kill at a distance by means of electric discharge.

The olgoi-khorkhoi is said to resemble a cow's intestine. It is reported to be red in color, and is sometimes described as having darker spots or blotches. Sometimes it is said to have spiked projections at both ends. The worms are purportedly thick-bodied.

Roy Chapman Andrews (an American explorer, adventurer and naturalist who became the director of the American Museum of Natural History), in his book On the Trail of Ancient Man (1926) cites Mongolian Prime Minister Damdinbazar who described the worm allergorhai-horhai in 1922:

"It is shaped like a sausage about two feet long, has no head nor leg and it is so poisonous that merely to touch it means instant death. It lives in the most desolate parts of the Gobi Desert…"

In 1932 Andrews published this information again in the The New Conquest of Central Asia, adding: "It is reported to live in the most arid, sandy regions of the western Gobi." Andrews didn't believe in this animal's reality.

Czech explorer Ivan Mackerle described the animal from second-hand reports as: "Sausage-like worm over half a meter (20 inches) long, and thick as a man's arm, resembling the intestine of cattle. Its tail is short, as [if] it were cut off, but not tapered. It is difficult to tell its head from its tail because it has no visible eyes, nostrils or mouth but may have them on some occasions. Its colour is dark red, like blood or salami..."

The worm is said to inhabit the southern Gobi Desert. The Mongolians say that the olgoi-khorkhoi can kill at a distance, either by spraying an acid-like substance or by using an electrical discharge. They say that the worm lives underground, hibernating most of the year except for when it becomes active in June and July. It is reported that this animal is mostly seen on the surface when it rains and the ground is wet.

The Mongolians also believe that touching any part of the worm will cause instant death. Its' venom supposedly corrodes metal and local folklore tells of a predilection for the color yellow. The worm is also said to have a preference for local parasitic plants such as the goyo. 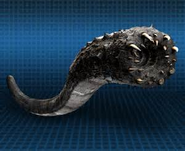 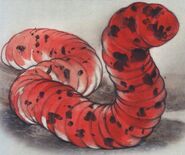 The Beasts that Hide from Man 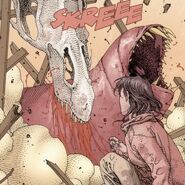 The Dark Horse Book of Monsters