Sun Wukong, also known as the Monkey King, is a mythological figure who features in a body of legends, which can be traced back to the period of the Song dynasty. He most notably appears as a main character in the 16th century Chinese novel Journey to the West.

According to the legend, Sun Wukong is born from a magic stone that sits atop the Mountain of Flowers and Fruit. The stone develops a magic womb, which bursts open one day to produce a stone egg about the size of a ball.

When wind blows on the egg, it turns into a stone monkey that can already crawl and walk. He bows to each of the four quarters. As his eyes move, two beams of golden light shoot toward the Jade palace and startle the Jade Emperor. When he sees the light he orders two of his officers to investigate. They report the stone monkey, and that the light is dying down as the monkey eats and drinks. The Jade Emperor believes him to be nothing special.

On the mountain, the monkey befriends various animals, and joins a group of other monkeys. After playing, the monkeys regularly bathe in a stream.

He finds a large iron bridge over rushing water, across which is a house. He brings the other monkeys to raid the house and they make it into their home, declaring the stone monkey their king. He takes the throne and calls himself Handsome Monkey King.

Sun Wukong establishes himself as a powerful and influential demon. In search of a weapon, he travels to the oceans and acquires the Golden-banded staff Ruyi Jingu Bang, a treasure of Ao Guang, the dragon-king of the Eastern Seas. Upon Sun Wukong's approach, the staff glows to signify it has found its true master. It can change its size, multiply, and fight according to its master's whim. It weighs 13,500 jin (8.1 tons). When not wielding the weapon, Sun Wukong shrinks it down to the size of a sewing needle and tucks it behind his ear.

In addition to taking the magical staff, Wukong defeats the dragons of the four seas in battle and forces them to give him a golden chain mail shirt, a phoenix-feather cap, and cloud-walking boots.

Sun Wukong then defies Hell's attempt to collect his soul. Instead of reincarnating, he wipes his name out of the Book of Life and Death along with the names of all monkeys known to him. The Dragon Kings and the Kings of Hell report him to the Jade Emperor.

Havoc in the Heavenly Kingdom[]

Hoping that a promotion and a rank amongst the gods will make him more manageable, the Jade Emperor invites Sun Wukong to Heaven. The monkey believes he will receive an honorable place as one of the gods but is instead made the Protector of the Horses to watch over the stables, the lowest job in heaven. He rebels and proclaims himself the Great Sage, Equal of Heaven and sets the Cloud Horses free in vengeance.

The Heavens are forced to recognize his title; however, they again try to put him off as the guardian of the Heavenly Garden. When he finds that he is excluded from a royal banquet that includes every other important god and goddess, his indignation turns to open defiance. He steals and consumes Xi Wangmu's Peaches of immortality, Laozi's pills of longevity, and the Jade Emperor's royal wine, then escapes back to his kingdom in preparation for his rebellion.

Sun Wukong later single-handedly defeats the Army of Heaven's 100,000 celestial warriors, all 28 constellations, four heavenly kings, and Nezha, and proves himself equal to the best of Heaven's generals, Erlang Shen. Eventually, through the teamwork of Taoist and Buddhist forces, including the efforts from some of the greatest deities, and then finally by the Bodhisattva of mercy, Guanyin, Sun Wukong is captured. After several failed attempts at execution, Sun Wukong is locked into Laozi's eight-way trigram Crucible to be distilled into an elixir (so that Laozi could regain his pills of longevity) by samadhi fires. After 49 days, however, when the cauldron is opened, Sun Wukong jumps out, even stronger. He is now able to recognize evil with huǒyǎn-jīnjīng, an eye condition that also gives him a weakness to smoke, and proceeds to destroy Heaven's remaining forces.

The Jade Emperor and the authorities of Heaven appeal to the Buddha, who arrives from his temple in the West. The Buddha bets that Sun Wukong cannot escape from Buddha's palm. Sun Wukong smugly accepts the bet. He leaps and flies to the end of the world. Seeing nothing but five pillars, Wukong believes he has reached the ends of Heaven. To prove his trail, he marks the pillars with a phrase declaring himself the great sage equal to heaven (and in some versions, urinates on the pillar he signed on). He leaps back and lands in the Buddha's palm. He is surprised to find that the five "pillars" he found are in fact the fingers of the Buddha's hand. When Wukong tries to escape, the Buddha turns his hand into a mountain. Before Wukong can shrug it off, the Buddha seals him there using a paper talisman bearing the mantra Om Mani Padme Hum in gold letters. Sun Wukong remains imprisoned for five centuries

Five hundred years later, the Bodhisattva Guanyin searches for disciples to protect a pilgrim on a journey to India to retrieve the Buddhist sutras. In hearing of this, Sun Wukong offers to serve the pilgrim, Xuanzang, a monk of the Tang Dynasty, in exchange for his freedom after the pilgrimage is complete. Understanding that the monkey will be difficult to control, Guanyin gives Xuanzang a gift from the Buddha: a magical headband which, once Sun Wukong is tricked into putting it on, can never be removed. With a special chant, the band will tighten and cause unbearable pain. To be fair, Guanyin gives Sun Wukong three special hairs, to be used in dire emergencies. Under Xuanzang's supervision, Sun Wukong is allowed to journey to the West.

Throughout the epic novel Journey to the West, Sun Wukong faithfully helps Xuanzang on his journey to India. They are joined by "Pigsy" and "Sandy", both of whom accompany the priest in order to atone for their previous crimes. Xuanzang's safety is constantly under threat from demons and other supernatural beings, as well as bandits; Sun Wukong often acts as his bodyguard to combat these threats. The group encounters a series of eighty-one tribulations before accomplishing their mission and returning safely to China. There, Sun Wukong is granted Buddhahood, becoming the "Victorious Fighting Buddha", for his service and strength.

2) Strength - Sun's greatest feat trakes place in chapter 33 when he supports the weight of two mountains on his shoulders while running after his master with “the speed of a meteor”. Most importantly, one of these mountains, Mount Sumeru, is considered the axis mundi of the Hindo-Buddhist cosmos. This means he successfully lifts a chunk of the universe. Additionally, he is able to easily wield his magic staff weighing 13,500 jin (17,550 lb / 7,960 kg).

3) Cloud-Somersaulting - He can travel 108,000 li (roughly 33,600 mi / 54,073 km) in a single somersault leap (note: the Earth’s circumference is only 25,000 mi / 40,233 km). However, the world that Monkey inhabits is not the same as our Earth. The world presented in the novel follows Hindo-Buddhist cosmology, where the universe is depicted as four holy continents floating in a cosmic ocean around a great celestial mountain.

4) 72 Transformations - This series of oral formulas allows Wukong to change his physical appearance into anything from gods, monsters, and humans to animals, insects, and even inanimate objects like buildings.

5) General Daoist Magic - This skill allows Monkey to call forth gods and spirits, grow or shrink to any size, part fire and water, create an impassable barrier, use his hair to create clones of himself or any person or object, conjure a wind storm, cast illusions, freeze someone in place, unlock any lock, give human disciples superhuman strength, etc.

6) Martial arts - Sun is a master of armed and unarmed combat. Beyond his trademark staff, he knows how to wield many other weapons, including swords, spears, axes, bows and arrows, etc. He teaches these skills to his children, along with troop maneuvering. Additionally, Monkey is proficient in short fist, a style known for quick, compact punches. In fact, some of the boxing techniques he is described as using appear in 17th-century military encyclopedias and even appear in Taiji boxing. His proficiency in combat enables him to defeat the 100,000-strong heavenly army.

The Monkey King: Hero Is Back 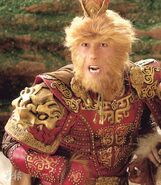