Umbreon is a Dark-type Pokémon species and the result of an Eevee being leveled up with high friendship during the night, as it needs to absorb energy waves from the moon to trigger its evolution into this specific form (other conditions will generate different species instead).

As noted above, Umbreon's juvenile stage is Eevee: a Pokémon known for its highly-adaptable genetic structure, which can evolve into many different forms depending on environmental factors. Like all Eevee-derived Pokémon, Umbreon has a gender ratio of seven males to just one female.

Umbreon is a lean, medium-sized fox-like quadruped with short black fur and red eyes, and is known for its strictly nocturnal habits. Its sweat glands produce a poisonous fluid which is sprayed over its pelt as means of protection when this Pokémon feels threatened or agitated.

It also has ring-shaped yellow marks on its fur, which glow in the dark as means of intimidation, to scare away potential enemies. In spite of that, it's also noted that this Pokémon is an expert at lurking in the darkness to ambush unsuspecting prey.

Eevee has its own Z-Crystal which is called Eevium Z.

Some Eevee are capable of temporarily assuming a Gigantamax form when they Dynamax. They cannot evolve. 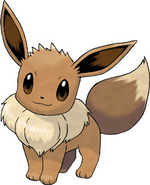 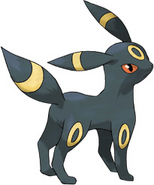 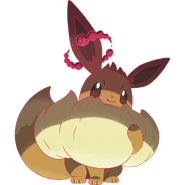 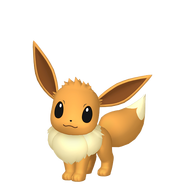 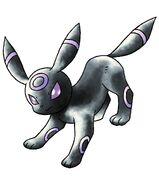 Beta design of Umbreon. He was originally going to be a Poison-type, but was later changed to the new Dark-type.
Community content is available under CC-BY-SA unless otherwise noted.
Advertisement